G-8 and His Battle Aces Audiobook #33

Out of war-torn skies soars…G-8 and His Battle Aces! The greatest combat pilot of the War to End All Wars, G-8’s true name was stricken from all official records. Flying a supercharged warplane, backed by his wild wingmen, Bull Martin and Nippy Weston, G-8 fought the most horrific foes the Kaiser could throw at him.

The creation of writer Robert J. Hogan, G-8 and His Battle Aces appeared in the magazine of that same name for over a decade. Envisioning the expected strain on the writer’s imagination a monthly novel would enact, Steeger and Hogan agreed that the new series would soon grow stale if they didn’t spice it up with elements of the fantastic. This recipe ranged from merely super-scientific death rays to unabashedly supernatural manifestations. Nothing was taboo in G-8. Hogan was a pioneer of over-the-top plotting generations before the term was coined.

For our newest exciting G-8 release, we have selected Patrol of the Cloud Crusher, a particularly wild tale torn from the June, 1936 issue. Hogan outdoes himself by pitting his hero against an astounding threat—titanic disembodied hands reach out of the clouds to ensnare and crush Allied aircraft! Even the Master Spy is baffled.

It begins with a ghostly hand that snatched an important clue and vanished! If that wasn’t baffling enough, a patrol flying past a giant cloud encountered a monster arm whose crushing fingers destroyed their warplanes.

Taking to the skies, G-8 rushes to investigate the so-called Hand of Providence that had seemingly taken the German side in the war. But it was one thing to fly into that hell cloud. Quite another to survive the encounter!

When the Flying Spy and his Battle Aces take on the challenge of the Patrol of the Cloud Crusher, will they return––or will their own aircraft be pulverized by the seemingly supernatural power? Herr Doctor Kreuger strikes again!

Nick DeGregorio composed the music for the G-8 and His Battle Aces series of audiobooks. 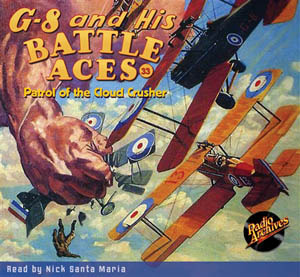