THE LOST BEASTS OF TA’TAMBA by John Peter Drummond
Ki-Gor, White Lord of the Jungle, and Brend, boy-emperor of the Stolen Kingdom, battled side by side against the thousand warrior-beasts of Ramfis.  Crawling swamp lizards would have had a better chance of victory.  But struggling in the claws of Durge-Rama, the fiend usurper, Helene cried: “Ki-Gor, my mate, will save me!”
NIRVANA OF THE SEVEN VOODOOS by John Peter Drummond
No broken, haunted captive lived to flee the jackal-born terrors of Nirvana, land of the red mists, where the gleaming-eyed scientist Krishna ruled by the dread hand of ancient gris-gris.  And yet Ki-Gor, White Lord of the Jungle, dared enter that forbidden kraal, dared try to wrest his mate Helene from its secret power—and even dared challenge the half-human gorilla-men to a battle that could only end in defeat. 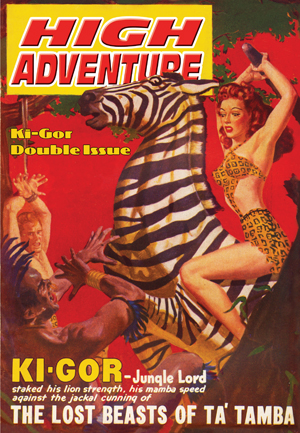