The War-Nymphs of Venus by Ray Cummings
“The voluptuous, golden civilization of Arron was doomed.  Licentious laughter echoed through the water-kingdom, unmindful of the clanking, relentless invasion of the Gorts.  What fools, this handful of warrior-maidens, to pit their thin strength against Tollgamo’s iron legions.”
Vampire of the Void by Neil R. Jones
Exiles of the Desert Star by Ross Rocklynne
Revolt on Io by Nelson S. Bond
The Monster That Threatened the Universe by R.R. Winterbotham
Treasure of Triton by Charles A. Baker
The Cosmic Derelict by John Russell Fearn
4 1/2 B, Eros by Malcolm Jameson
Satellite of Fear by Frederick Arnold Kummer, Jr. 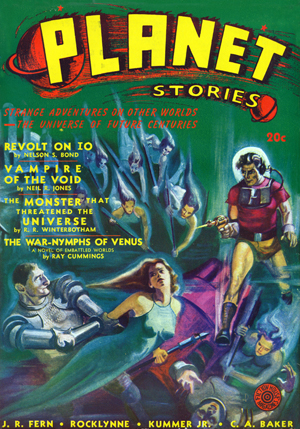