White Star of Egypt by Justin Case [Hugh B. Cave]
The girl was lovely, but Slode concluded she must be insane.  Why would she want to got to Bir Nashn?  The more he studied her, the more Slode began to doubt his own astuteness.  Using her very loveliness as a tool, couldn’t the girl be plotting to. . ?
The Golden Stool by Hugh Speer
Unless he unearthed the stool, he would find himself out of a job, stranded in Africa with Ruth on his hands!  Yet if he had known the full force of native ju-ju, he might better have risked the consequences and abandoned the search….
Nero’s Ring by Lew Merrill
The Emperor had gazed through that ring to learn the secrets of the future.  Now Herman studied it, and saw life and love as they affected him from days of antiquity to the horror under Der Fuerhrer. . .
Diana Daw “The Land of the Harpies” by Clayton Maxwell
Comic section
Desert Glory by John Wayne
The girl hated all white men, and even when the explorer had wiped out her bandit band and captured her, she was too dangerous to forget.
Outlaw Working by Max Neilson
If he stayed in Peshawur the British would be glad to throw him in jail for gun-running—that is, if he wasn’t killed first.  BUt a few minutes with a girl spy made him take the danger trail.
No Silver Handles by William Decatur
Oriental intrigue has no fury like that of a jealous woman!  Even a mad Arab thief cannot hold out forever when a woman’s wiles are set against him.
Short Rope by R.T. Maynard
A man who tortures must beware the torturer when he incurs the hate of a woman—and when he has stolen his power from it rightful owner.
Death Patrol by Paul Hanna
Betraying a pirate chief was dangerous, yet to save her sweetheart this girl would do anything.  She didn’t know that it is hard to betray one man without putting other heads in the noose, too. 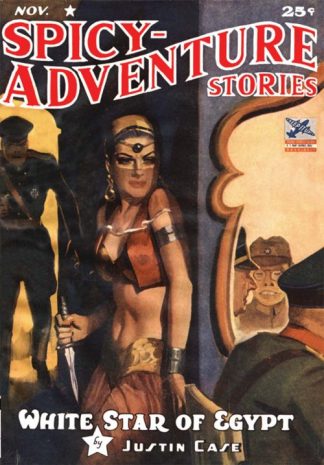