In stock (can be backordered)

THRILLING DETECTIVE HEROES – From the ’30s through the ’50s, madmen, mayhem and murder ruled the malignant world of the Thrilling detective pulps. To the rescue came a succession of intrepid investigators fearing nothing but injustice. These were the Thrilling Detective Heroes. Some of their names are legend in pulpdom. Most of them remain to be discovered in this collection of colorful tales taken from Thrilling’s flagship detective pulps, THRILLING DETECTIVE and POPULAR DETECTIVE. Each story features a series hero in one of his most entertaining exploits.

“Thrilling Detective Heroes” is a selection of tales from detective pulp fiction published back in the 1930s and 1940s during the “Golden Age” of pulp magazines. There are ten outstanding and representative selections in this timeless anthology, each of which is accompanied with a brief introduction and critical sketch of the author, showcasing work from Perley Poore Sheehan, Frederick Painton, Ray Cummings, Benton Braden, Milton Lowe, Walt Bruce, Robert Leslie Bellem, Carroll John Daly, M. D. Orr, and Stewart Sterling. It is particularly interesting and informative to read the introductory biographical sketches of each of the authors chosen. Their detective heroes’ names read like a litany of murder mystery nabobs: Doctor Coffin, Duffy Kildare, Dr. Feather, Mister Finis, Dr. Zeng, Nick Ransom, Race Williams, Archie McCann, Don Marko, and last but not least, Baghdad, Hobo Detective. If your literary taste in detective mysteries runs to thrilling “time lost” reads such as those originally published in ‘Popular Detective’ or ‘Thrilling Detective’ magazines, then “Thrilling Detective Heroes ” was meant for you. Enhanced with the inclusion of a history of the Thrilling pulp magazine chain, “Thrilling Detective Heroes” will appeal to both an older audience for its nostalgia value and introduce a new generation of mystery fans to a series of true Golden Age classics. 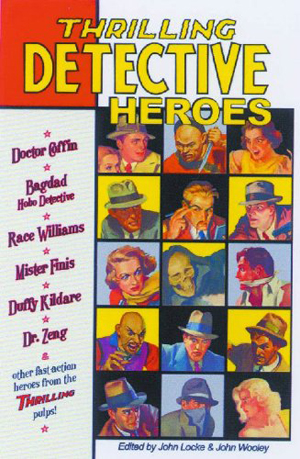