DOC SAVAGE # 14: The Man of Bronze & The Land of Terror
The Man of Bronze’s origin story is revealed in the classic Lester Dent novels that launched the superhero genre, in an extra-length # commemorating the 75th anniversary of Doc Savage’s pulp debut. First, the mysterious death of Doc’s father leads the Man of Bronze to the Central American republic of Hidalgo where they discover a lost Mayan empire in the mythical Valley of the Vanished. Can Doc defeat the Feathered Serpent and the Red Death and free King Chaac and the beautiful Princess Monja? Then, Doc Savage trails the murderous master villain Kar (who controls the deadly Smoke of Eternity) to prehistoric Thunder Island where Doc and his men fight for their very survival against terrifying dinosaurs. This collector’s item pulp reprint features a never-before-published foreword and autobiographical essay by Lester Dent, Walter Baumhofer’s classic pulp covers, interior illustrations by Paul Orban and commentary by popular culture historian Will Murray. 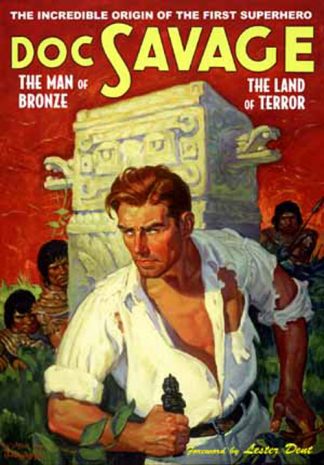