In 1810, the still-young United States of America continues its westward expansion as a national economy begins to flourish. But the country’s commerce is seriously disrupted in Kentucky, at the juncture of the Ohio and Mississippi rivers, by daring pirates who strike from nowhere and then disappear into the wilderness. Captain John Norton, a young military officer working undercover, mounts a secret campaign against the buckskinned brigands, who are led by a mystery man known as Blacknose. Along the way Norton receives aid from such legendary figures of early American history as rugged pioneer Daniel Boone, future President Zachary Taylor, prominent naturalist John J. Audubon, and Shawnee Indian chief Tecumseh. Yet the clever Blacknose and his followers continue to evade their would-be captors.

The Wilderness Trail originally appeared in the February 1915 issue of Blue Book and was the first of more than 370 fictional works—novels, novelettes, and short stories—H. Bedford-Jones wrote for that distinguished pulp magazine over a period of 33 years. It was also his first historical novel with an American setting. Issued in hard covers many decades ago by the British firm of Hurst & Blackett, The Wilderness Trail has never been published in the United States as a book—until now. 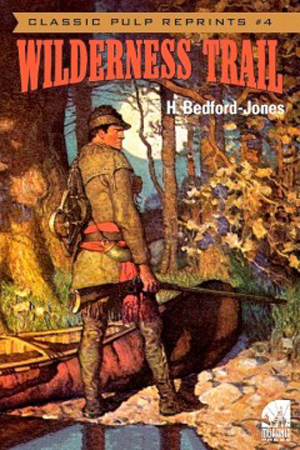