Oil — black gold — the blood of Mother Earth! America had squandered its precious reserves and a syndicate of skilled saboteurs was destroying the remaining store! With all National defense rendered helpless for want of it, bitter despair gripped the hearts of the country’s millions. Pillage, slaughter, and slavery — misery and death — threatened each American! And Jimmy Christopher, Operator #5 of the United States Intelligence, was gambling his life recklessly in a valiant effort to save his native land from extinction!

From out of the pages of Operator #5  magazine steps a dramatic hero who pits himself against threats to national security from all origins. Whether it’s a subversive internal threat, or a full-scale invasion from an enemy land, James Christopher stood ready and resolute to defeat it.

Aided by a small group of trusted assistant, ranging from his twin sister Nan to scrappy street urchin Tim Donovan, Jimmy Christopher was a one-man defense force. Proud and patriotic, expert marksman and swordsman, he is the best America has to offer in a time of severe trial.

Originally written by master pulpsmith Frederick C. Davis, the Operator #5 series was a clear forerunner of the spy and espionage genre, which exploded in the 1960s when President John F. Kennedy happened to remark that he enjoyed reading Ian Fleming’s James Bond novels. The first Bond film, Dr. No, was released in 1962. Soon, America was surrounded by spies. The Man from U.N.C.L.E., Our Man Flint, and Nick Carter, Killmaster were just a few of the most prolific. Jimmy Christopher was on the job a generation before them all, blazing the espionage trail, and keeping America safe from fascism and other wicked isms. 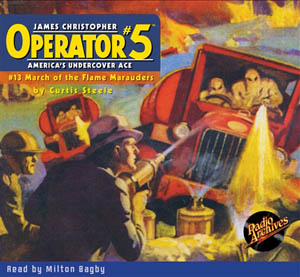