G-8 and His Battle Aces Audiobook #13

They called G-8 the Flying Spy. History never recorded his exploits—and for good reason! No one would ever believe World War I was that wild!
“Be Warned! Each night with the setting of the sun the giant Tarantula Spider will spin his web across the Front. If you send your ships out tonight — he will eat them!” H.Q. scoffed at this warning. But G-8 saw it carried out, saw four Yank planes devoured by the most ghastly creature that ever stalked the skies. What was this new horror? How could Yank bombers hope to get past its net of death?
Among the heroes of the pulps who soared through their adventures, G-8 flew higher and farther than any of his contemporaries. His true name unknown, the Flying Spy was no mere flyboy, but the champion ace of World War I.
It was the summer of 1933, and despite the Great Depression, Popular Publications was booming. Part of their Autumn expansion plans entailed launching the Spider, and a companion title to be aimed at the legions of readers who drank up fictionalized accounts of World War I Allied aces versus Imperial Germany’s various bi-winged counts and barons, red and otherwise.
One of Popular’s star writers, Hogan was doubtless the first writer publisher Harry Steeger considered when casting about for a suitable scribe. The unnamed magazine was on the schedule as a monthly. Hogan had been an air cadet during World War I, although the armistice came before he could ship out and see action. Steeger and Hogan hashed out an idea. It was part Eddie Rickenbacker and What Price Glory?—which was a popular Maxwell Anderson stage play turned into a motion picture. Price stressed the horrors of war as counterpoint to the sentimental comradeship of the Allies in the trenches.
Nick Santa Maria brings G-8 and His Battle Aces to vivid life in this exciting audiobook. Nick DeGregorio composed the music for the G-8 and His Battle Aces series of audiobooks.
Chapter 1: Whispering Death
Chapter 2: Lieutenant Hartmann
Chapter 3: Railroad Patrol
Chapter 4: Flying the Gauntlet
Chapter 5: The Devil’s Pet
Chapter 6: Death in the Web
Chapter 7: The Mad Men Screams
Chapter 8: Spider Staffel
Chapter 9: The Living Corpse
Chapter 10: Behind the Lines
Chapter 11: Leutnant Wessel
Chapter 12: Toast to a Spy
Chapter 13: Murder Tarmac
Chapter 14: Web of Destiny
Chapter 15: Knock-Out Ace
Chapter 16: G-8 is Dead!
Chapter 17: Spider Patrol 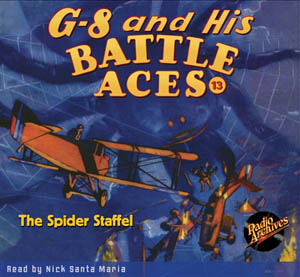